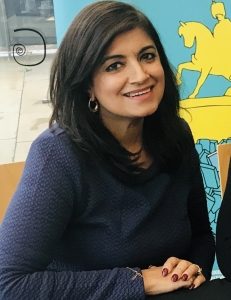 Reshma Ruia is an award winning author and poet. Her first novel, Something Black in the Lentil Soup, was described in the Sunday Times as ‘a gem of straight-faced comedy.’ Her second novel manuscript, A Mouthful of Silence, was shortlisted for the 2014 SI Leeds Literary Prize. Her short stories and poems have appeared in various British and International anthologies and magazines and commissioned for the BBC Radio 4. Her debut collection of poetry, A Dinner Party in the Home Counties, won the 2019 Debut Word Masala Award.

She has a PhD and Masters in Creative Writing from Manchester University (Distinction) as well as a Bachelor, and Masters Degree with Distinction from the London School of Economics. She worked as a development economist with the Food and Agriculture Organisation and the World Food Programme of the UN. She is the co-founder of The Whole Kahani-a writers’ collective of British South-Asian writers; fiction editor of Jaggery magazine; and book reviewer for Words of Colour. Born in India and brought up in Italy, her writing portrays the inherent preoccupations of those who possess a multiple sense of belonging.

© 2020 Indian Influencers in UK, Technical Support by Swaraj IT Services

This is a notification that can be used for cookie consent or other important news. It also got a modal window now! Click "learn more" to see it!

We may request cookies to be set on your device. We use cookies to let us know when you visit our websites, how you interact with us, to enrich your user experience, and to customize your relationship with our website.

Click on the different category headings to find out more. You can also change some of your preferences. Note that blocking some types of cookies may impact your experience on our websites and the services we are able to offer.

These cookies are strictly necessary to provide you with services available through our website and to use some of its features.

Because these cookies are strictly necessary to deliver the website, you cannot refuse them without impacting how our site functions. You can block or delete them by changing your browser settings and force blocking all cookies on this website.

We also use different external services like Google Webfonts, Google Maps and external Video providers. Since these providers may collect personal data like your IP address we allow you to block them here. Please be aware that this might heavily reduce the functionality and appearance of our site. Changes will take effect once you reload the page.